Gaza City – As firefighting in Gaza draws to a close, news of fears, resignations, and survival are coming from the surrounding area.

Many frightened civilians began saying goodbye to their relatives and friends over the course of 11 days, fearing that they would die one of the strongest in Israel around the Palestinian house.

Ibrahim al-Talaa, 17, lives in the Mughazi camp in the middle of the Gaza Strip. He was one of those who sent a final farewell to relatives and close friends via Facebook.

Ibrahim described his difficult day in the bloody uprising when Israeli warplanes bombed their home. He also said he felt like he was ending up with loved ones around him.

“Israeli warplanes have bombed several places in my area with more than 40 consecutive weapons, not to mention the previous warnings given in the last three wars.

“As soon as the bombs exploded and closed, the house shook as if it had hit our head … My nerves collapsed and I almost cried, but I tried to control myself, to give my family strength. I saw my 13-year-old sister crying in silence. I hugged her for a while and tried to comfort her. I brought her a glass of water and tried to calm her down, even though I wasn’t terrified. ”

They all die together

The death toll in Palestine on Saturday reached 248, including 66 children, including more than 1,900 people injured in Israeli airstrikes and weapons strikes. A rocket fire killed at least 12 people in Israel, including two children.

When war broke out in Israel against Gaza, the Ibrahim family, including his parents, four brothers, and three sisters, gathered in one room, hoping they would all survive – or die – together.

“We heard the sound of bombs approaching and several ambulances were coming, we said goodbye to each other, and then we hugged each other warmly,” Ibrahim said.

The boy then posted a Facebook post. “My friend called me to see if I had sent it, and I told her I loved her,” she said.

“As a Palestinian in Gaza, I have been deprived of my easy right to be safe. I have asked my friend to spread my message that I will never forgive anyone and President in this world who supports the conquest of Israel, they live a normal life, or they may be silent. ”

Reem Hani, 25, lives in the Shuja’iyya area with his parents and five siblings. On May 14, Israeli forces began firing on the eastern border of Gaza City about 100 meters.

“Four hours later, the bullets became heavier and closer, just going everywhere,” he told Al Jazeera. “Crazy, my older brother urged us to run and get in the car. We have come with a bag of items including all our documents. ”

In 2014, Israel re-invaded Shuja’iyya with jets and tanks, destroying many homes on the ground. Running away from their father’s car this time, Reem saw the same thing six years ago with hundreds of people running through the streets, some barefoot and carrying their children, all heading west to the Gaza Strip.

Some were riding motorcycles, taxis, and donkeys, the constant wailing that illuminated the darkness.

“My family and I survived in 2014, but we do not expect to survive this time because they caused more than 50 accidents around us while we were in the car. I continued to hug my younger siblings, shedding tears, and fearing that I would die before I reached our destination, ”said Reem.

“I also sent a farewell message to my close friends, asking them that I would share their thoughts and prayers with them when I died.” 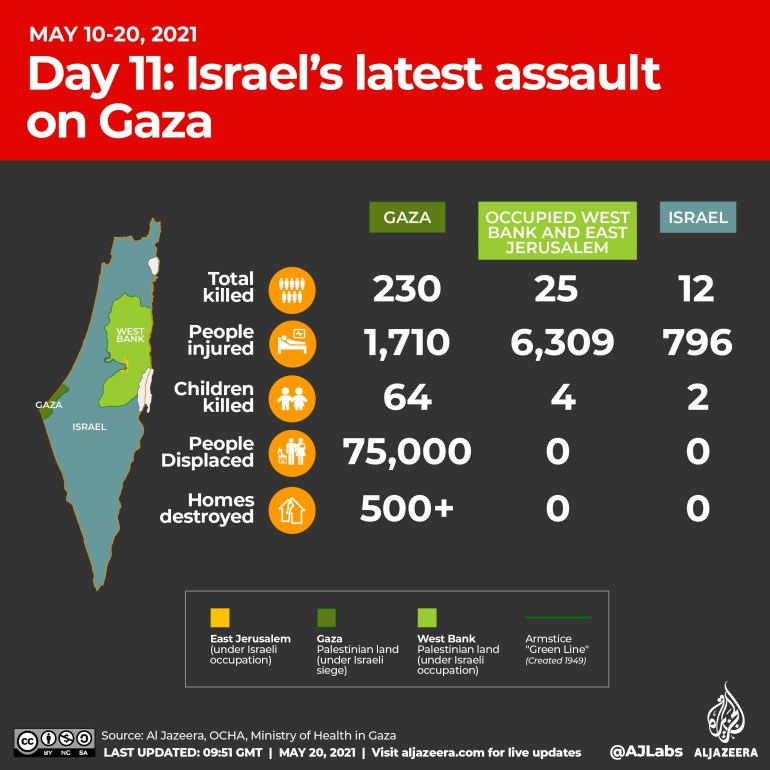 ‘We’re all in this together’

Maha Saher, 27, from al-Zaytoun, is the mother of two daughters – Sara, 4, and Rama, five. Her husband is a photographer so that when the tragedy strikes in Gaza, she has to leave her family to pursue her career.

“I have a responsibility to protect my daughters from any harm in this violent conflict when my husband is missing,” Maha said.

“I fear my husband as he presents the truth and his images to the West, and to my daughters because all of us – children, women, journalists, doctors and ordinary people – are experiencing it,” she added.

“He then destroyed the same road to prevent ambulances and fire trucks from reaching the houses that were damaged by the injured,” Maha said.

“I am afraid he will target my house while we sleep, as he did with the killings on al-Wehda Street. I do not fear death. But I’m afraid of losing one of my children – or losing it. ”

She also said that she had slept through the night with the threat to care for her children and then slept for about 30 minutes at sunrise each day. At a time when she was being abused, her daughter Sara cried uncontrollably, begging her father to return home.

“I called my husband to let Sara talk to him. He told her how much he missed her and asked her to come and play with him. They just kept quiet, couldn’t answer, ”said Maha.

Maha and his family “survived by the mercy of our God”, he said, and now live with his uncle in a dormitory, after his house was hit by a drone.

China's first spacecraft Mars rover has passed through the world

Do US-led sanctions exacerbate the problem in Afghanistan? | | Stories

The Omicron bounce: crypto, crude and stocks return to viruses
1 hour ago

Nissan to spend $ 17.6 billion on EV development over the next five years
1 hour ago

Nissan to spend $ 17.6 billion on EV development over the next five years